I'm not a very art galleries etc person, so it was with great reluctance that I was dragged kicking and screaming to Perpignan (September 1998) to visit VISA. We picked up the catalogue at the Castillet museum (in the old gateway) and I groaned to see that there were 8 venues spread all over the centre of town. 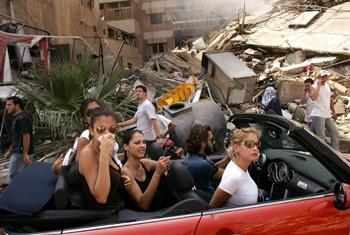 For the first two weeks of September, every available wall of every available building is converted into a gallery featuring the best in press photography from every corner of the earth.

Within minutes of entering my first venue I was transfixed. Grouped mainly by photographer then sub grouped by subject, the photographs are a window on our world, its beauty and its barbarity. 20 years of intimate portraits of Mohammed Ali and the faces of the crowds at Princess Diana's funeral in the Chapelle St Domique, Destitute and addicted ex boy soldiers from West Africa in the Couvent des Minimes, extraordinary wedding photographs from Bosnia in the Castillet. By 7 o'clock I thought I could take no more and neither could my feet. I was wrong.

A good meal in an open air restaurant (outside the left hand wall of the cathedral) revived those parts that needed reviving and at 9.45 we were on the move again to the Campo Santo, a large open space on the other side of the cathedral in rue Amiral Ribeil. You don't need to know where it is, just follow the throng! Each night, for about and hour and a half, (during the first week of VISA only) some of the best press photographers in the world have their work projected on enormous multi screens here, high above the crowds (and there's also overflow seating and projection relayed to the place in front of the Cathedral).

The photographers, somewhere below, spin their fascinating tales of derring-do, accompanying the image bath swirling above. That night's offering was from the photographer who took the haunting photo, one of the most memorable I have ever seen, of the Madonna like Algerian woman, face slightly tilted, humanity almost drained away, that graced the front pages of the world's press in early 1998. It was followed by a run through of 20 years worth of the best from the Paris Match stable.

10,000 photographs are projected on those screens during the week. 50,000 photographs are on display in 7 venues during the two weeks. This year (2015) it runs from 29th August - 13th Sept and ITS ALL FREE! These days you don't have to drag me kicking and screaming, I'll be there, first in line for another look at the world through the lenses of some extraordinary, brave and sometimes visionary people...

Information and a venue map can be found at: