15ish years ago I wrote an article (it's still in the Infopack) about a day out to Nuria and Paul and Caroline Furlong's walk up to Coma de Noucreus, elle in high heels... I reproduce it here following because I've just found, on YOUTUBE, a delightful video of exactly the walk described and more, over the top from Nůria in Spain to Thučs in France via the Carança lakes and Gorges. 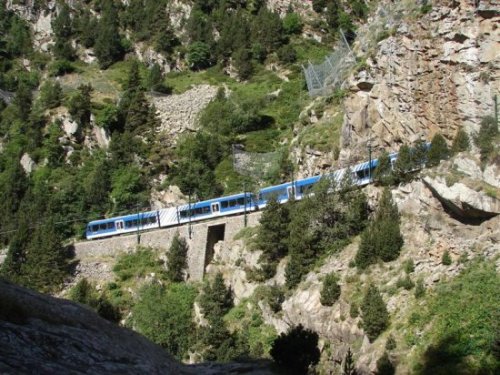 A tiny warning, the rescue authorities stress that this walk, which stretches over 2 days with a stop in a mountain refuge, should only be attempted between mid May and mid September. I add this because alarmingly the date on the video is 4-5 April (you'll see what conditions they met, albeit with the cheeriest of faces!) You always start from the Spanish side, 2 hours drive from our Albčres villages, and if your not prepared to go the whole hog a visit to Nůria, on the rack railway is one of the highlight must do visits of our area.

And thanks to the makers Trentranvia & Co for a really good video (bottom of this page), if you like the music I'm almost certain it's a Spanish fusion group called Radio Tarifa.

Other photos on this page from: - Amunt! - NIKA - A Savery and unknown

Readers of the 1995 Information Pack may remember a note about a walk across the Pyrénées via the Carança valley. We promised to investigate further and indeed we did. Intrepid explorers from the London and German offices set out for a day trip to the starting point, the shrine at Nuria, in Spanish Catalonia in mid September and this is what they discovered:

Being from Essex originally, I regard anything over 200 foot with a certain sense of awe. I also smoke too much, so once advised that "investigating" this walk from the Spanish side would be facilitated by a rack railway taking us up to 1900 metres before we had to move a muscle, we headed over the border and at Figueres, turned right. 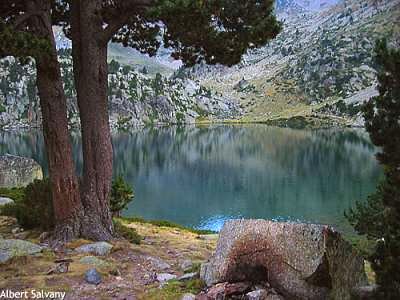 To follow in our footsteps, take the road through Besalú then Ripoll (slightly faster via the new Capsacosta Tunnel) to Ribas de Freser. You are looking for the "Cremallera" railway station which is called Ribas Enllaç (or Ribas Empalme in Spanish). There is ample parking in the station car park. Trains go up and down about every 90 minutes, more often in high season. Sit on the right hand side of the train for the best view. After Ribas Town station it meanders through tame looking meadows for a while and you may wonder what all the fuss is about. You find out at Queralbs when the rack is engaged. Pointing its nose in the air the train almost struts as it climbs the valley (memories of Thomas the tank engine puffing "I think I can, I think I can" surface at this point!) and the magic begins to work. Everyone gets up and alarmingly moves over to your side of the carriage. The view is indescribable.

You will catch sight of the old pilgrim path below, built lovingly over centuries by the faithful, stone by painful stone, as they struggled up to the shrine at Nuria. Awe really sets in when you realise that this path was the only access until 1931 when the railway was built. Lineside plaques bearing the names and heights of other mountains of the world are passed as you climb above their imaginary peaks. Silence falls across the carriage. Everyone stares in wonder. Then a last grind of the rack and you have arrived.

So there we were, briefcase in hand and laptop over shoulder (I didn't want to leave it in the car) surrounded by eager young Catalans out for a weekend walking in one of the most beautiful places I have ever seen. Trying to make our absurd baggage look like knapsacks, the mobile phone firmly hidden, we strode off to explore.

A group of buildings on a small plateau at the head of a valley. Towering above us on three sides, brooding and majestic, the high Pyrénées. Very much a centrepiece is the austere looking hotel which has been recently completely gutted and refurbished with all modern comforts. There are apartments to be rented here as well, a cafeteria, shops and an "information about Nuria" continuous cinema presentation. A rather incongruous boating lake in front of the hotel looks icy and very deep. Two nights stay at the hotel includes an hours boat hire free! 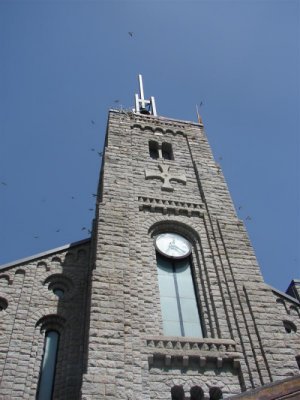 Clearly intended as a massive architectural statement of 1930's Spain, man conquers mountain and Madrid conquers all, but just stand back a few hundred metres in any direction and these tiny scratches on the mountainside pale into such insignificance that you wonder how they could have ever fooled themselves.

Stunned, and full of exhilarating upwards momentum, we decided to go even higher on discovering an unexpected cable car (Telecabina). It is one of those non-stop marvels where you have to take a well timed run at it to get in. A group of nuns looking almost tipsy piled in before us with shrieks of laughter and enjoyment. A ten minute ride took us up to a sizeable youth hostel where eager young things were checking in for a good night's sleep before going over the top.

We realised that this, for us, this time at least, was truly the end of the line. At sea level we had felt comfortable, a few hours earlier, in T-shirts and shorts. Here at about 6500 feet, the world seemingly laid out below us, the sky swirling in autumn colours, we stood weighed down by electronics, our breath condensing in the early evening air, slightly shivering.

Cold and ridiculous we may have looked, but we could not move. For half an hour we were rooted to the spot. It was one of those rare moments when everything stands still, calm descends and the realisation that the world is more beautiful than we can ever imagine it to be, enters our befuddled, urban, 90's minds.

We headed humbly back down to the bar to recover our strength before gathering our information and making our notes.

From Nuria there are many beautiful walks apart from 'the big one' going over the top and if you are not experienced it may be a good idea just to go up for the day and try out one of the shorter ones first. I found particularly attractive the idea of taking the train up and walking back down to Queralbs along the old pilgrim path. This, they calculate on the walking map, available from the Information Bureau at Nuria, will take you about 2.5 hours, but I would allow longer because you will be continually stopping to take in the view and wave at the people in the train! It is walk 1A. 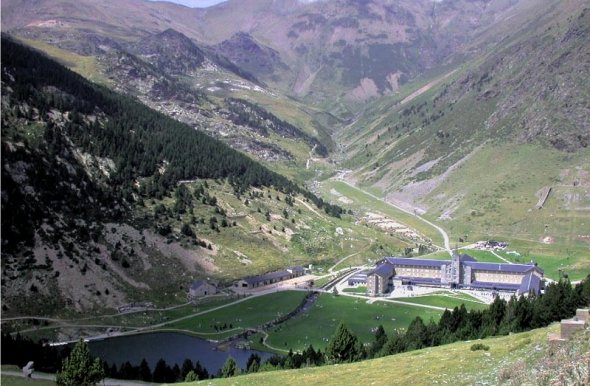 If you want go up to the top and back down again, without loosing sight of civilisation try walk 7A/B. It is described as an 'easy ascent' over 900 metres. A further walk along the ridge will takes you to the head of the Carança valley and some extraordinary views. Allow at least three hours in each direction.

The crossing of the Pyrénées via the Carança (a combination of paths 7A, 7B, 7C, 7F and 7G) should only be attempted between mid May and mid September because of the altitude and the weather. You must be well prepared and take, at minimum, water, food, a sleeping bag, space blanket and a tent*1. Never take the mountains for granted. 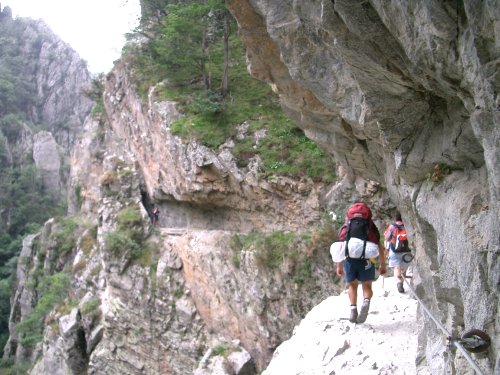 A suggested plan is: drive early on day 1 to Thučs-Carança railway station (formerly called Thučs-entre-Valls) and leave the car there. You will find it approximately 4 kms west of Olette on the N116 the road between Perpignan and Andorra. Although it is in the middle of nowhere, you are advised not to leave anything valuable in the car, especially in high season.

Take The Little Yellow Train up to Latour de Carol*2, the end of the line. Change trains and take the local train across the frontier to Puigcerdŕ where you change again onto the Spanish line. This takes you down the other side to Ribas Enllaç where you change onto the rack railway as described above. This will take you all day! Stay the night at the Youth Hostel or the Hotel at Nuria.

Day 2, very early, take one of the paths up to the Col de Carança and down the valley on the other side where you will be passing through a landscape of alpine meadows and untouched lakes. You are aiming for one of the mountain refuges, preferably the "Ras de Carança", to stay the night. There are 30 places here and in summer they serve food, if there's any left by the time you get there! 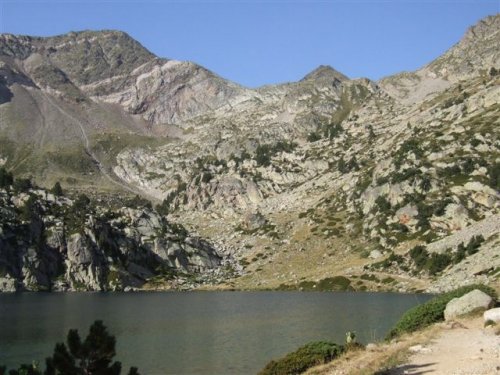 Day 3. The long and beautiful descent down the Carança valley continues through woodland and slowly narrowing, down the steep Gorge de Carança where there are vertiginous metal bridges and ropes to hold onto before regaining your car at Thučs!

Register at the Information Bureau at Nuria if you are going to be on the mountain overnight. This helps the mountain rescue service if you get lost or have an accident. They will also advise on and sometimes book a space in the refuges. Think about going with one of the organised groups if you are at all nervous.

Check the weather forecast before you go. 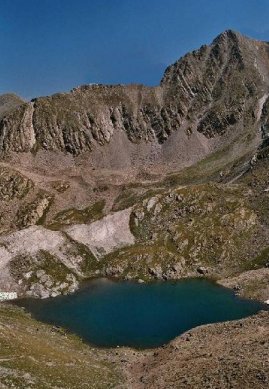 *1 In high season the refuges may be full so it is wise to carry a tent.

*2 You can also get off the Little Yellow Train at Bourg Madame, ten kms before Latour de Carol, and just walk across the frontier to Puigcerdŕ station. It will take you about 20 minutes.

You may of course just feel like a day out. A pleasant circular trip goes as follows and if you start very early you will at least have a few hours at Nuria. From Le Boulou take the D115 road up the Vallespir through Amélie les Bains and Arlčs sur Tech to the frontier at Col d'Arčs. Prats de Mollo is an interesting walled town just before the frontier and a good coffee stop. On the Spanish side the road winds down through a remarkably different landscape to Camprodon, a faded spa town where you can buy delicious wild boar hams and other local specialities from several shops in the main street. Carry on through Sant Joan de les Abadesses to Ripoll and on to Ribes for the train up to Nuria. Afterwards, descend again to Ripoll and take the Capsacosta tunnel to Besalú, where the medieval streets and bridge over the river are well worth looking at. There is an interesting restaurant on the main street, the Fonda Siques. A good road then takes you down to Figueres and the Autovia back into France.

...or another day out is to simply go to Thués Carança and park as described above and head up into the ravine for a couple of hours, then come back down again the same way.

This article is dedicated, with much love and admiration, to Caroline Furlong, dynamo of the Cafe Shamroc in Laroque, who gamely managed to climb path 7A right to the top of Coma de Noucreus in high heels and clutching her handbag. She too came unprepared (her husband Paul, told her she was going somewhere special for her birthday so she got dressed up!) but got further than us, About the equivalent, in fact, of 1/3rd the way up Everest.


(Use your browser's BACK button to return)