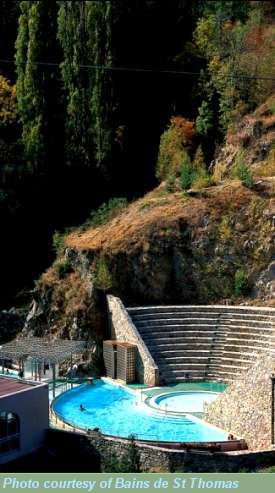 It's the end of February. Tiny points of white blossom are beginning to appear on the almond trees. The sun is shining brightly oh so brightly and the colours everywhere are vivid. No mist, you can almost reach out and touch the snow capped peaks to the West and it's warm enough to wind down the car windows and let the breeze rush through the hair. Time also to dig out the swimming costumes …. and head for the hills.

Up the valley of the river Têt from Perpignan, past the still sleeping peach orchards. In another 3 or 4 weeks their dark red blossom will begin to stain the sky. Past sleepy villages and drifting wood smoke, up and up the narrowing valley to Fontpedrouse.

Near the far end of the village turn left (decidedly downwards) and follow the signs to ST-THOMAS-LES-BAINS. The road crosses the river and climbs up the other side into a ravine, carry on carefully, especially if there's snow on the ground et voilà, Les Bains de St Thomas are before you.

I once took a friend who hails from tropical climes on this little expedition. Her face grew longer and longer as we approached, dropped completely when we passed the snow line, and turned positively hostile when we arrived. Her sense of adventure prevailed however and swimming costumes donned, we tiptoed through the snow and descended down the steps into the open air pool….

Within minutes, smiles all round. Delicious warmth, penetrating warmth, warmth that really gets to those aching joints, those tired knees, those nagging lower vertebrae - Ahhhh! The water comes out of the ground at an amazing 60°C but it's cooled down to a more comfortable temperature before you come into contact with it.

After half an hour, or so, a little stress steps in, as you realise that at some point the pleasure will have to end, and at some point, in the not too distant future, you'll have to get out …. But not now, not right now ….

When I first came here over 25 years ago it was derelict and very sad. The heyday of small spartan spas had long passed and perhaps, here, no-one believed any more in the extravagant claims of the original prospectus from 1878 which promised to cure everything from war wounds to scrofulous ulcers via catarrh, gout and acute prostate infections.

The dynamic mayor of Fontpedrouse was determined not to let the baths or his mountain village die however and he fought and battled and rebuilt and created some employment for the young people who would have otherwise packed their bags long ago. You can't do much on the local taxes of a village with an ageing population of 126 souls but he performed a miracle, two new pools, a cooling and water purifying plant and an enormous semicircular stepped terrace where even in winter you can lie out in the sun after your "immersion" and pretend you're in heaven.

The mayor has been at it again. The old spa "hospital" has been transformed into a modern "hammam" with Turkish baths and other delights including the medicinal application of mud, you can even have a massage. It's still deliciously unsophisticated as befits its surroundings but there's now a whiff of the activities of a PR company in the air, almost miraculously an algae has been found in the water, it's claimed to do marvellous things to wrinkled skin and is incorporated into a range of lotions and potions, all available, of course, at the mini boutique on the way out …

I wonder what it does to scrofulous ulcers?

As Mr Hurtebis says on his excellent site (linked below), "if they could do it, Europe would put filters on the sea."

Apart from the water in the central shower unit, the sulphur has been "extracted" and "replaced" with chlorine ..... and the water temperature lowered from 38 to 36...

BY CAR About 45 minutes drive from Perpignan on the N116 to Fontpedrouse. As you are leaving the village, at the top end, follow signs LEFT AND DOWNWARDS towards ST-THOMAS-LES-BAINS. You cross the river and then go up the other side, and I really do mean UP. Signs at some points get apparently contradictory but follow LES BAINS rather than ST THOMAS (the now abandoned hamlet) and you will be OK.

TRAIN/FOOT Take the Little Yellow Train from Villefranche de Conflent to Fontpedrouse, it's a pleasant 1.5 km walk from the station. (note protest from a recent (2012) client, who wishes me to add that it's fantastic but feels like 1.5km in a vertical direction too and don't try doing it in flipflops :) see the solution at "NAVETTE" below. If you spent half day in the Bains you could spend the other half walking in the hills.

The Bains now run a free bus service (Navette) to and from Fontpedrouse Railway Station, meeting the train that arrives around 10 a.m. and taking you back to the train that goes down again at 4pm-ish. You have to phone and book it a good day in advance, better two. 04 68 97 03 13.

2015 CLOSURES
This year the Baths will be closed for maintenance from Monday 6th June to Friday 26th June inclusive and from Monday 16th November until to Sunday 22nd November inclusive.

Price has gone up again but it's still reasonable. 6.50 for adults. Season tickets available.

Good photos can be found clicking below, courtesy of the Hurtebis family, please email me if any of these links expire.

In fact the whole Hurtebis site is fascinating! They live at Font Romeu, a ski resort on the plateau of the Cerdagne (at the top of the Little Yellow Train ride). Don't miss the pages on mushrooms and wild fruits (La cueillette)

(Use your browser's BACK button to return)